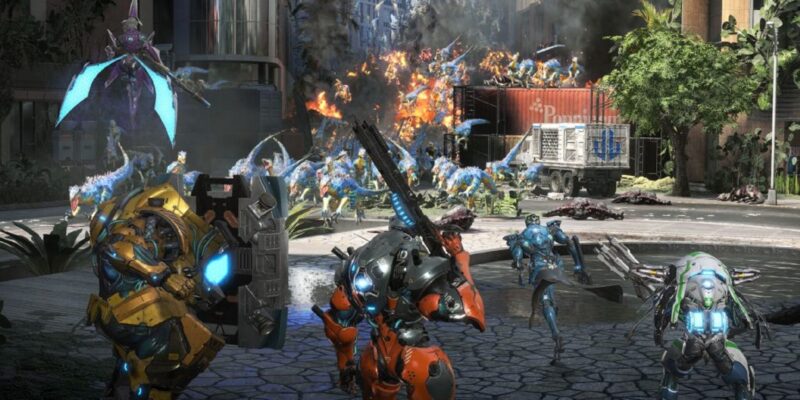 During PlayStation’s State of Play showcase, Capcom gave fans a glimpse into its new IP, Exoprimal, with a trailer. Exoprimal transports you two decades in the future where dinosaur invasions are a common occurrence. You use Exosuits in order to protect the world against this threat, which is putting humanity on a course toward its own extinction.

The trailer gives us a taste of what we can expect from Exoprimal. The year is 2043, and an android is warning citizens about a dinosaur invasion. Soon enough, a vortex opens and dinosaurs begin falling from the sky, as they do. We see characters putting on Exosuits and fighting against the dinosaurs in order to protect the city and its people.

You also get to witness some of the weaponry you’ll find in Exoprimal. An Exosuit appears to shoot fast-firing bullets, a melee weapon send groups of dinosaurs flying up in the air, and a shield is shown that pushes back the deadly hoards. Exosuits can be swapped out during combat, so you can switch up your tactics if needed.

Equip your Exosuit and jump into action

Exoprimal’s main game mode, Dino Survival, puts you against enemy teams to complete various objectives. These include eliminating dinosaurs, transporting cargo, and much more. Throughout the course of the game, an artificial intelligence known as Leviathan will guide you. Navigation, handing out evolving objectives, and predicting the location of new vortexes are Leviathan’s specialties.

As shown in the Exoprimal trailer, waves of dinosaurs will always outnumber your team. However, as you unlock pieces of the story and put it together, you can learn more about the dinosaur outbreaks. Capcom will have more information to share later this year. Make sure to stay tuned for more Exoprimal news. If you’re interested in joining the fight against the dinosaurs, Exoprimal will launch on Steam in 2023.

Valkyrie Elysium, an action RPG in the Valkyrie series, announced by Square Enix