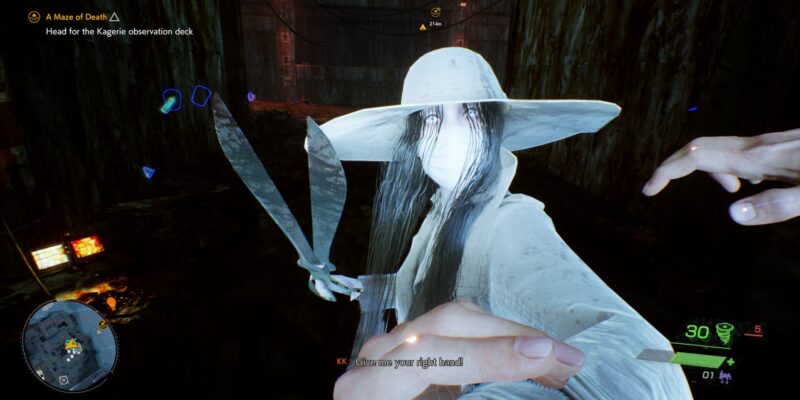 It’s been a while since I’ve seen a AAA open-world game that I didn’t burn out on long before hitting the credits. Ghostwire: Tokyo takes about as long to complete as games from the genre did about a decade ago. That is to say, it’s more than 20 hours if you do the major side content alongside the main story. That’s a far cry (pun entirely intended) from the endless bloat of most modern games. The story is kind of interesting in spots, but it takes a backseat to exploration and combat. Both of which are good, even if the combat peaks early and doesn’t have as much variety as it needs.

Tokyo is hit by a dark ritual. The bodies of every person in the city vanish, as their souls get stolen by a crazed man in a Hannya mask trying to bring people back from the dead. He never gets a name, and his plan is kind of generic. Akito, the protagonist, is dead. However, his body hasn’t vanished yet when Ghostwire Tokyo‘s story begins. Sensing an affinity for the spiritual, the spirit of the recently deceased spirit exorcist, KK, possesses Akito’s body. Akito is highly reluctant to assist KK in stopping the Hannya-masked villain, but agrees in order to help protect his comatose sister.

His sister, Mari, actually gets kidnapped by the bad guy because she’s the key to his evil plan for some reason. No, really. The game never explains away this massive coincidence or tries to make any sense of it, so you just kind of have to accept it. The characters in Ghostwire: Tokyo serve their purpose; no one is particularly interesting or unique. Akito is your bland everyman caught in an extraordinary situation. KK is your tough expert who doles out hard truths. The bad guy is bad and is doing bad things because he is a bad (Mwahahaha!). 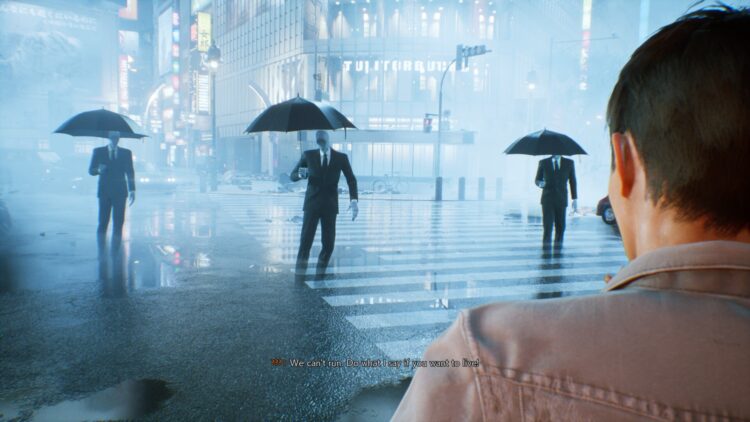 Suffice to say, you’re not going to be playing Ghostwire: Tokyo for the narrative. Instead, the world itself is among the main reasons to keep visiting. Simply put, this is probably the best virtual representation of Tokyo in any game yet. It’s immaculately detailed, and looks and feels like the real thing. Exploring the city is a joy. To the game’s credit, it does the Spider-Man: Web of Shadows thing and puts the main collectible everywhere, offering you plenty of reason to just enthusiastically running around as you hunt them down.

Instead of tokens or what have you, you’ll use paper dolls called katashiro to rescue spirits that haven’t been abducted by Dr. Badface. Said spirits are then uploaded to phone booths (which, yes, still exist in Tokyo) for experience and cash. Ghostwire: Tokyo is surprisingly parkour-heavy, as Akito is able to climbs most ledge dotting the landscape. Early on, he gets the ability to tether onto Tengu that fly around the city. If you choose to invest the skill points, you can summon Tengu to many ledges later in the game — basically functioning like a grappling hook.

It’s an absolute blast to zip around on rooftops and collect spirits, all the while battling foes and keeping an eye out for sidequests and other collectibles. Over 50 Jizu statues can be found around Tokyo, which increase your ammo count. Unfortunately, they’re very hard to find, as their silhouettes look an awful lot like all the other clutter when you use your spectral vision ability. There’s also no way to locate them more easily, so it can be tough to actually track most of these down. The same is true of the game’s random collectible items, but those don’t actually serve a purpose. 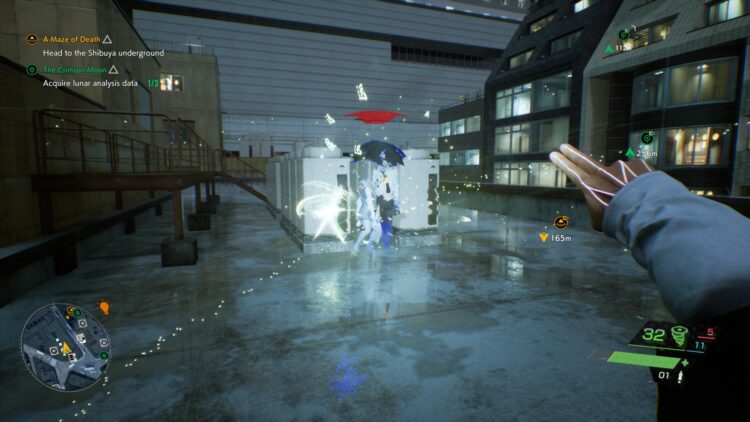 With your powers combined

Combat in Ghostwire: Tokyo is involved and highly enjoyable, but it’s not without some serious issues. It’s missing basic abilities for no good reason. Akito fights by using ethereal weaving, which lets him shoot spirit energy like he’s Yusuke Urameshi. You find wind (the fast one), water (wide, but short-range one), and fire (stronger and rarer) attacks early on and can power them up using your skill tree. The shooting itself feels good, as the creepy cadre of enemy spirits are often imposing and react satisfyingly to hits.

One issue is that, since there are only three main attacks that you get early on, things get repetitive very quickly. You don’t really learn anything that’s new, and the skill tree doesn’t offer much in the way of worthwhile improvements. Because of this, Akito stays a at pretty similar level of strength throughout most of Ghostwire: Tokyo. He can also use a bow and talismans, but you have to buy ammo for those. Naturally, that means people who like to hoard are going to barely use them.

Things are complicated by the scarcity of fire energy. You constantly get your wind and water energy replenished, either by smashing certain floating objects or simply fighting enemies. However, fire energy is much more rare. Therefore, you’ll mostly swap between two attacks for the entirety of the game. You can charge these attacks to alter their effects, but this doesn’t do much to alleviate how limited your attacks are. Enemies mostly use melee attacks and you can block them (perfect guarding nullifies all damage), but Akito has no dodge or real mobility options. He can feel truly sluggish during combat. A dodge would have made things feel so much better. 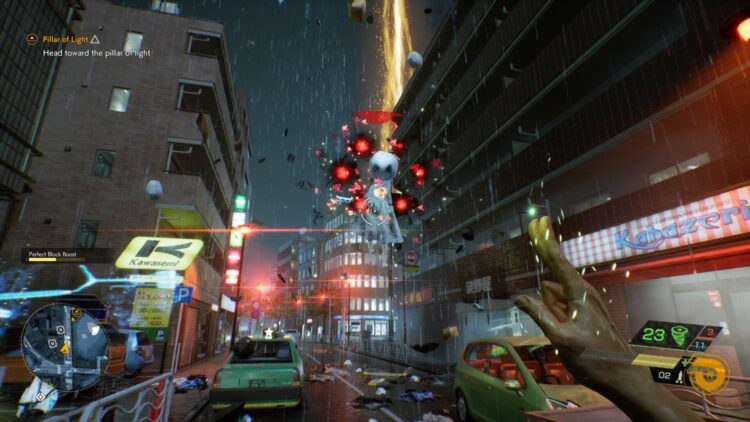 On normal difficulty, Ghostwire: Tokyo can be a decent challenge. Your playthrough does get much easier, though, as you increase your health (via leveling up and eating consumables, which heal you) and equip prayer beads that increase your damage. However, some of the enemies just feel kind of cheap. A few foes do way too much damage and can cut you down in just a handful of hits. You’ll sometimes be up against unfair waves due to how the game loves to throw you in tight areas with enemies that spam projectiles. The adversaries in this game certainly enjoy to take potshots at you with little warning. You’ll be focused on the fight and, wham, you take a hit from an enemy hidden behind the row of foes in front of you.

One neat combat feature is that, once you do enough damage to a foe, their core is exposed. Grabbing it (either with a rope or your bare hands) will kill your enemy right away. However, if you get hit while grabbing a core from a distance, the killing animation gets canceled. And the enemy will immediately close its weak-spot, meaning that you’ve missed your chance to take them out quickly. It can be quite frustrating, especially with the aforementioned potshots.

You don’t get interrupted when using close-quarters finishers, but you can still take damage. There’s no limit to how much damage you can take at once. So finishing an enemy can sometimes lead to you getting beaten to death within the span of a second with zero recourse. There are a lot of things I like about the combat in Ghostwire: Tokyo. But so many aspects could be improved. I feel like everything was almost there, but the game didn’t quite flesh out the concepts. 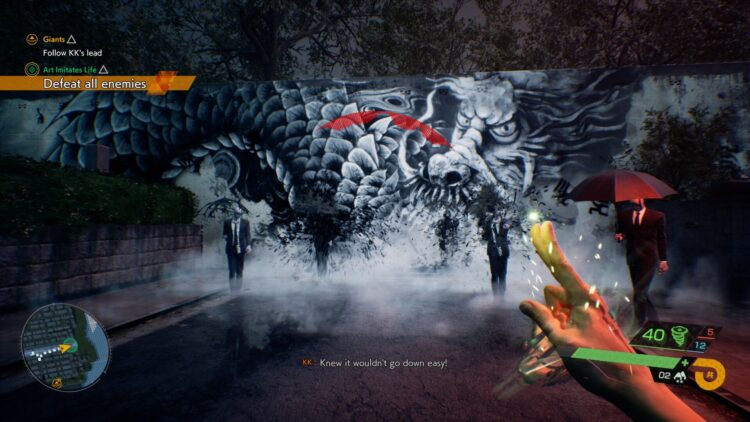 Take in the sights

Still, there’s a good amount of content on offer. It took me 22 hours to beat the main story of Ghostwire: Tokyo, completing all the major side content and finding 70% of the spirits. The game has a lot of sidequests, which are actually fairly involved. Many of these have their own stories and usually revolve around Akito and KK stopping a curse or investigating other supernatural mysteries. Doing this also involves use of talismans and hand seals. You’re pretty much a bonafide onmyouji here, which I found kind of enthralling. You’ll also deal with a lot of youkai. Completing these side missions rewards you with magatama you can use to open the way to new skills.

There are also a few boss battles, but they’re fiercely easy and short — including the final fight. A bit of a missed opportunity there. Once you beat the game, you can go back and finish whatever you want, but there’s no new content. The only thing you get are prayer beads that let you upload spirits without using a payphone. You can also take certain things with you into a new game, if you want to go again. As far as the PC port itself, the game runs okay, but should probably perform a little better. Annoyingly, there appears to be some type of either mouse acceleration (or the mouselook is emulating analog movement), because mouse movements are stuttery and inaccurate.

The combat isn’t as good as it could have been and the story is pretty bleh, but I seriously enjoyed my time with Ghostwire: Tokyo and honestly couldn’t put it down until I’d finished it. It’s rare for a game to pull me in this hard, despite the issues. It’s a bit dated and will possibly feel pretty light to anyone who expects to get more hours out of a full-priced, open-world game. But the world itself is such a delight and playing as an onmyouji is so much fun that it’s difficult for me to hold the negatives too hard against the game. 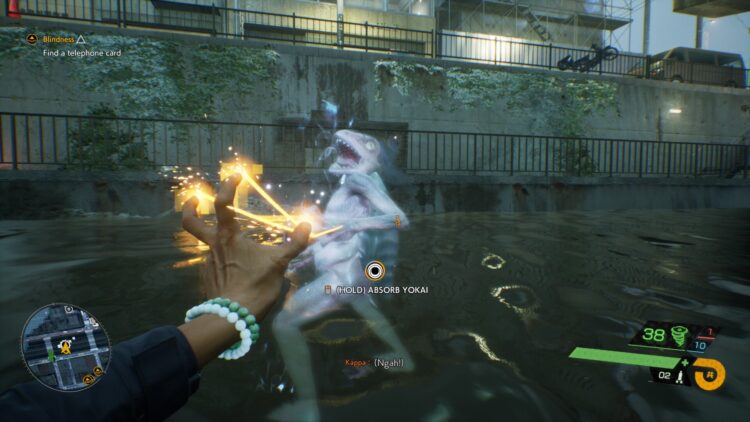 Captivating and highly entertaining despite how limited and aggravating the combat can be, Ghostwire: Tokyo is stays appealing thanks to its strong open world and dedication to spirit exorcism.